Deerassic Park Education Center / Events/Classes / Tournaments
Deerassic Park offers several tournaments/derbies throughout the year to give the community a chance to compete in a friendly environment of outdoor activities. For dates, entry fees, registrations, and more information, check the calendar of events on the site or call (740) 435-3335. 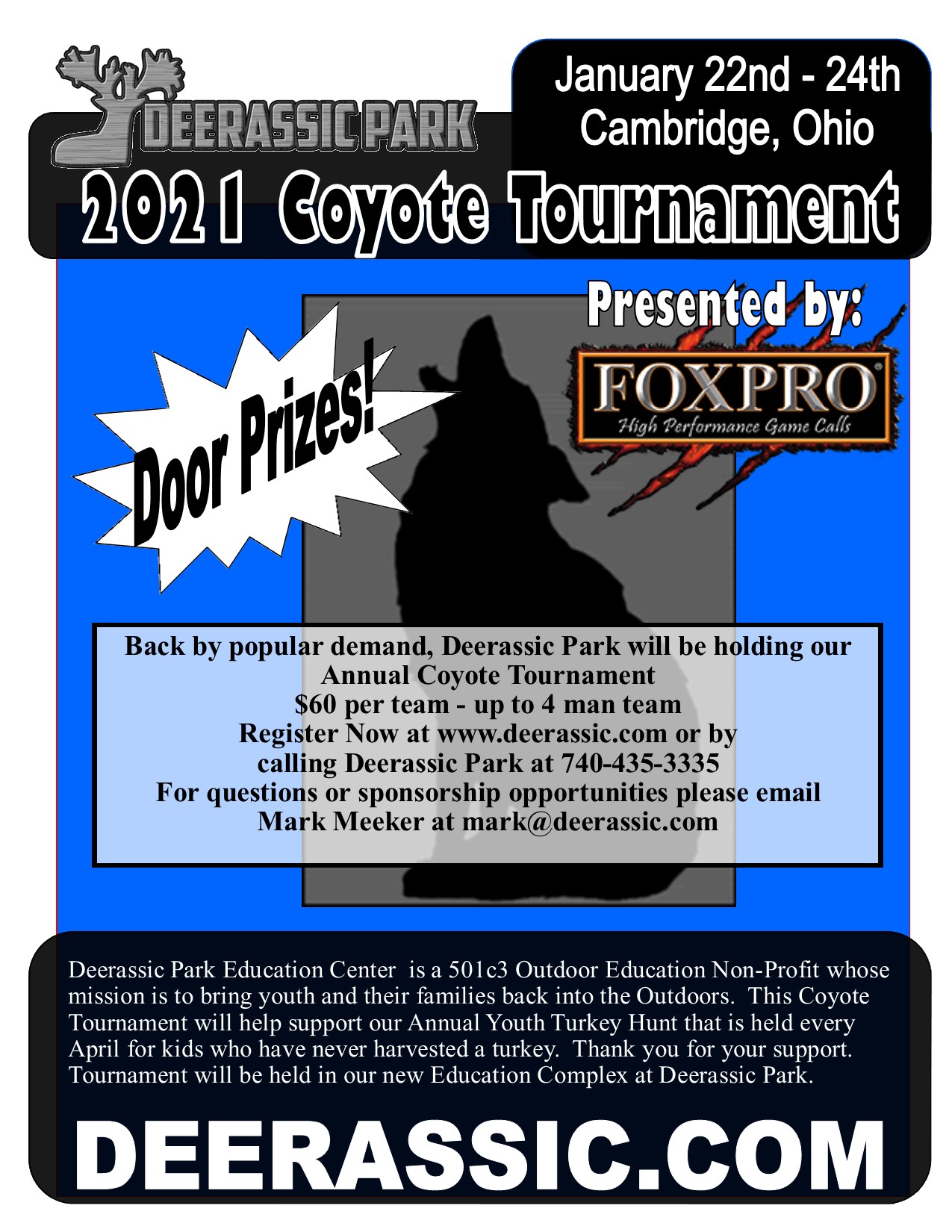 REGISTER NOW!
Coyote Round Up

Held annually in January, this tournament is a great way to help control the coyote population and help protect the upcoming spring fawns whose main source of predation is the coyote. (Also sometimes a second one is held in the spring.)

Normally hosted during the second or third weekend in February, this tournament is held during the annual Ohio rabbit season.

A very popular tournament, this annual get together of bowfishing addicts occurs in May when the carp are spawning and it’s good shooting! It’s a blast!

Calling all catfish enthusiasts! This tournament is sometimes held biannually depending on demand. The first one is usually held in May.

Not unlike all the other tournaments, which are all fun for the kids, this one is centered around them! A great fun-filled evening where youth come out with their families to fish the Deerassic pond. Annually held in June.

If you like late nights out in the water and having a blast then this is the tournament for you! Annually held in June this tournament determines which team can catch the most frogs!

This annual tournament is our sole fall tournament held in November. Bring a couple youth out and enjoy walking through the fresh fallen leaves in search of squirrels!

Copyright © 2021 Deerassic Park. All Rights Reserved.
We use cookies on our website to give you the most relevant experience by remembering your preferences and repeat visits. By clicking “Accept All”, you consent to the use of ALL the cookies. However, you may visit "Cookie Settings" to provide a controlled consent.
Cookie SettingsAccept All
Manage consent

This website uses cookies to improve your experience while you navigate through the website. Out of these, the cookies that are categorized as necessary are stored on your browser as they are essential for the working of basic functionalities of the website. We also use third-party cookies that help us analyze and understand how you use this website. These cookies will be stored in your browser only with your consent. You also have the option to opt-out of these cookies. But opting out of some of these cookies may affect your browsing experience.
Necessary Always Enabled

Performance cookies are used to understand and analyze the key performance indexes of the website which helps in delivering a better user experience for the visitors.

Analytical cookies are used to understand how visitors interact with the website. These cookies help provide information on metrics the number of visitors, bounce rate, traffic source, etc.

Advertisement cookies are used to provide visitors with relevant ads and marketing campaigns. These cookies track visitors across websites and collect information to provide customized ads.

Other uncategorized cookies are those that are being analyzed and have not been classified into a category as yet.